Susannah Wesley DID teach her children to cry quietly.  :)

The little Wesleys were taught to fear the rod from a year old or earlier and to cry quietly, so that ‘that most odious noise of the crying of children was rarely heard in the house’.

So glad I figured this out.

And I agree with her.  Unnecessary crying of children is odious, in my opinion.


When I was raising my kiddos - I overheard a tip from someone, who said Susannah had this rule.  Kids are to cry quietly.  Well - when reading a blog the other day - I found this list.  Apparently - crying quietly didn't make this list.  That's funny... I wonder if I made that rule up.  LOL  Anyway - it works... I've taught my children to cry quietly.  It's very helpful - no screaming, or wailing...it cuts down on the manipulating crying and whining.  BUT - if there is a reason for wailing... then you know it's serious.  No screaming if there is no blood, flood, or fire.  That's my rule, whether it's Susannah's or not. 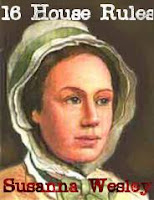 Susannah Wesley was the mother of 19 children, including John and Charles Wesley. Through much adversity, she dedicated her life to instilling a sense of Christian Destiny into each of her children.  Her children went on to change the world.
Here are 16 rules she laid down in her home.

1. Eating between meals not allowed.

3. They are required to take medicine without complaining.

4. Subdue self- will in a child, and those working together with God to save the child's soul.

5. To teach a child to pray as soon as he can speak.

6. Require all to be still during Family Worship.

7. Give them nothing that they cry for, and only that when asked for politely.

8. To prevent lying, punish no fault which is first confessed and repented of.

10. Never punish a child twice for a single offense.

12. Any attempt to please, even if poorly performed, should be commended.

15. Require no daughter to work before she can read well.

16. Teach children to fear the rod.
ON DISCIPLINE
Susannah Wesley believed that for a child to grow into a self-disciplined adult, he/she must first be a parent-disciplined child. To her, the stubborn flesh was the hardest battle for Christians to fight, and Godly parents would do well to equip their children to overcome it early.
She writes:

When the will of a child is totally subdued, and it is
brought to revere and stand in awe of the parents, then a great many childish follies may be passed by.  I insist on the conquering of the will of children betimes, because this is the only strong and rational foundation of a religious education  when this is thoroughly done, then a child is capable of being governed by reason and piety.

Milo went to a Thrift Store with me today.

He came home with a manual typewriter.

An Olympia, German made, typewriter.  One can still buy ribbon for it.  I think I'll add that to his birthday list.  He has been typing on that thing since he came home.  How fun... that definitely falls into the electronic free entertainment category.  Right up my alley!

Unlike the guy next to me who needs to pause the TV until we quit talking, so he can hear what is being said.  So we have to sit here quietly and listen... no conversation.  I really don't like watching TV as a family.  Let's all pull out the type writers, and books, and board games, and chat while we are entertaining ourselves!

Then I matured.... or something.  Oh I know - I joined the military, and taking my one earring in and out was annoying... I think I lost my gold hoop.

Yesterday I stuck an earring back in the hole.  It worked.

You know what's hard?  Trying to explain to the walmart lady that I only want my right ear pierced - to match my left ear.  Please.  But we finally understood each other.
Posted by Unknown at 12/26/2012 04:06:00 PM No comments:

I feel like I'm missing something.  I don't think I've ever been done this early.

Oh wait - I am missing something... what should I get in in-laws?

The public schools were having a snow day - so I declared one at our house too.  The kiddos were thrilled, until I showed them the list.  LOL  They could have free time after the list.

It wasn't bad... each kid had a project.  They got them done in a hurry - ran out to play in the snow, and the wind blew them back indoors after not too long.

So they spent their "snow day" playing games and watching TV.

I got laundry folded, and caught up.  Baked bread that fell, and froze some cinnamon rolls.  I'm not sure what happened there... we'll see how those rolls end up.  They are for Christmas morning.  Dish washer was unloaded, then filled.  Only to needing to be filled again before the day was over.  :)  Why does that job seem so endless?  I mailed a box, and made some lunch.  I didn't get to the den book shelves, which have been written down on lists for so long, and never gets done.  Some day - I should write it down first, then STOP... so it will get done.

Today - another snow day for the public school system... but I want to end up this school week on an even note. (I don't want to start a fresh week after Christmas Vacation in the middle of a week).  So we are going to finish our week today... and start vacation tomorrow!!

Tori told her dad she had her first snow day in 17 years.  Dan said he'd never had a snow day.  Really? Wow... I remember snow days when I was a kid.  Maybe he lived in the south.

This year, Milo started the decorating process.  He drug the tree and decorations up from the basement.  Most of the set up and decorating was done by the 3 littles, with a bit of help from mom.  I am so glad they like to help with this.  Actually, I am glad I didn't pass my disdain for decorating on to them.  I rejoiced with them and gave them free reign.  They really like being in control.

And look - it didn't turn out so bad. 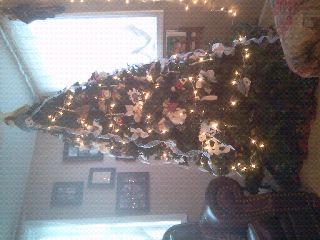 More than you want to know About Me

Other Places I Visit On-Line

My Friends Blog Too!